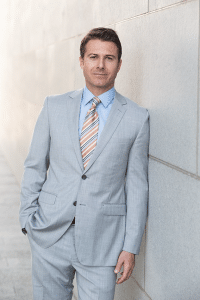 After a decade of litigating serious criminal charges, Bart Kaspero’s journey into technology and international legal issues is far from traditional—and something he finds to be an advantage for his clients.

Graduating from UCI with honors with a Bachelors in Clinical Psychology, Kaspero postponed law school so that he can gain experience in finance when he accepted an offer from E*Trade. After leaving the company, he began his legal education at Chapman School of Law in Orange County, CA.

At Chapman Law, Kaspero became a member of the Moot Court honors board and took specialized courses in corporations and agency law. He clerked for the Hon. Judge Ngo T. Nguyen (ret.) in the West Justice Center for the California Superior Court where he researched contractual disputes, commercial violations, and multi-party jury trials. He also interned with the City Attorney’s office for the City of Newport Beach where he obtained trademark and copyright certifications for the city and was responsible for researching First Amendment matters related to online Internet privacy policies. There, he learned the important facets of intellectual property law as it pertains to public agencies as well as private enterprises.

In 2006, he began his litigation career as a California state-appointed lawyer with the County of Riverside where he litigated both mid-level and serious felony cases to verdict. His high volume of jury trials resulted in full acquittals and hung verdicts for the clients he represented. After leaving the County, he founded his own private practice in Orange County, CA.

For the next ten years, Kaspero managed a multitude of complex legal issues and was often put to test his client’s positions in the courtroom. His most notable achievements included:

In 2016, he completed a specialized credential certificate in BI/DW Technology from the University of California Irvine, which eventually would lead him to develop his own proprietary data mining and analytic/results validation tools where he utilized his own mixture of parallel computing (big data) tools. He is also the author a data privacy research paper published in numerous legal technology journals related to his criminal record privacy practice and data warehouse knowledge.

In 2017, Kaspero invented a way of automating the removal of private criminal records by conceptualizing what would be RecordFixer.com.  He led a team of legal researchers and designers to build the web-application that would help people with criminal records optimize their privacy from background check companies. Kaspero’s unique multi-disciplinary approach caught the attention of notable innovators and soon became a go-to resource for unique businesses and experimental entrepreneurs, most notably: blockchain programmers, information engineers, and advising emerging cryptocurrency quantitative traders.

While developing new legal technology for use in the public and private markets, Kaspero joined SKT to add to the all-inclusive legal services the firm provides for their clients. With SKT, Kaspero seeks to help guide the firm’s clients into the cutting-edge of international trade and innovative businesses.