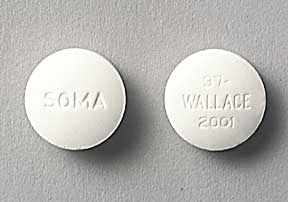 Somewhat similar to Valium, the prescription medication Soma (Carisoprodol) is used to help with physical therapy and musculoskeletal conditions. It has been administered since 1959, but was only reclassified by the DEA as a Schedule IV narcotic in 2012. Although it is legal to possess with a valid prescription, using or abusing Soma could lead to arrest and drug charges. To learn more about Soma, please continue to read below.

HOW HAVING SOMA (CARISOPRODOL) CAN BE ILLEGAL

Due to it’s DEA classification, the federal guideline in designating Soma as a controlled substance invariably affects individual states as well. The Schedule IV designation indicates that Soma (Carisoprodol) carries with it the ability to cause individuals to abuse the substance as well as risk dependency. Similar drugs that share the same classification are Xanax, Valium, Ativan, and Ambien. In California, Soma (Carisoprodol) is also considered a controlled substance, where possession without a prescription will be considered a misdemeanor offense.

Having Soma without a prescription or using it for purposes outside of what it was intended for is a felony and therefore punishable for up to one year in county jail (prior to the passing of Proposition 47, it used to be charged as a felony). There is hope however for first-time offenders that may qualify for alternative programs designated by the local courts depending on a number of factors.

As stated above, some individuals could qualify for drug diversion programs that allow the person that is charged to find alternatives to incarceration. A number of factors could disqualify someone from this relief but that largely depends on each individual (criminal history, facts of the case, etc.).

COMMON WAYS OF GETTING ARRESTED FOR SOMA (CARISOPRODOL)

As with other similar controlled substances, you may find yourself facing a police investigation if you either illegally use, abuse, or behave in an irresponsible manner while under the influence of Soma (Carisoprodol). One particular way of having immediate police contact is operating a vehicle while under the influence of Soma to a degree that your driving abilities are impaired to a measurable degree. Also known as a DUI investigation, a trained officer may detect when someone has abused a prescription pill upon the first few minutes of contact. Another common scenario of coming into contact with law enforcement is when a domestic event gets out of hand. Some individuals unnecessarily combine Soma (Carisoprodol) with other medications or alcohol—which could create erratic or uncontrollable behavior. A single phone call to emergency services or to the local police agency can open up into a full-blown narcotics possession investigation.

WHAT TO DO AFTER ARREST FOR SOMA (CARISOPRODOL)

If an adverse physical or psychological reaction has resulted from using Soma (Carisoprodol), your first priority should be in getting immediate medical treatment. People respond differently to medications and there can be a fine line between a bad experience and a tragic one. Once that is taken care of, you should obtain some guidance from a legal professional that is familiar with the laws relating to Soma and the local court procedures. Drug treatment programs and prosecutorial policies may differ from one city to the next and it’s best to get a good idea of your options before you or someone you know makes a rash decision. Contact us to schedule an appointment with an attorney to have your case evaluated for free.